A spa city in western Crimea with a history that goes back 2500 years.

The ancient Greek settlement that existed on the site of modern Yevpatoria was called Kerkinitis (Κερκινίτις in Greek). A fortress of Gezlev was built in the place of the ancient polis during the Ottoman rule. When Crimea became part of the Russian Empire, the city was renamed into Yevpatoria in 1784 "due to the dissonance of its name" in honour of Mithridates VI Eupator, the king of Pontus. 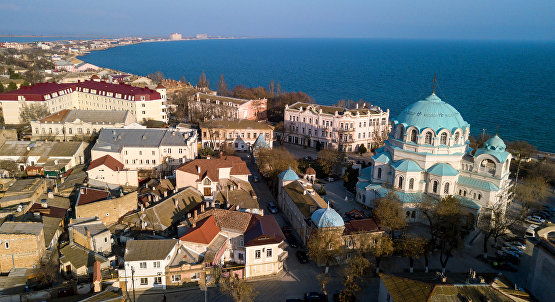 The town's eventful history left a rich heritage. Apart from its ancient ruins, Yevpatoria has a wealth of religious monuments. The Little Jerusalem route stands out among them, offering visitors such unique landmarks as Karaite kenesas, Egie Kapai Synagogue, a dervish tekiye (lodge) dating back to the 15th-16th centuries, the Armenian Church of St Nicolas, Juma-Jami Mosque, St Nicolas Cathedral, the Greek Church of Prophet Elia and Turkish baths.  Cafes and restaurants along the route offer meals that were traditionally made by the parishioners of these churches.

In the late 19th century Yevpatoria began to gain popularity as a spa resort. The Moinaki Mud Treatment Centre was built, and with it summer houses, gardens and parks. In the Soviet era, health resorts for workers were set up in the former mansions of the nobility. In 1936 Yevpatoria became a national children's health resort. To this day, the city offers a host of options for children's recreation without parents in summer camps and medical treatment at health resorts.

Yevpatoria has a steppe and arid climate. The average number of sunny days is one of the highest in the peninsula:  286 days a year compared to 270 days in Yalta. The city is open to winds and attracts droves of windsurfing and kitesurfing enthusiasts.

There are several coastal salt lakes with mineral water of different composition. Moinaki Lake is the most popular one of these. It is also considered to have the best mud baths. Historically, mud is mined from three sources: Chokrazh, Moinaki and Saki coastal lakes.

The average air temperature in Yevpatoria is 2˚С in January and 24˚С in July. Owing to the shallow-water effect, the sea warms up quickly and does not cool off for a long time. The average water temperature is 16˚С in May, 21.7˚С in July and 20.2˚С in September. 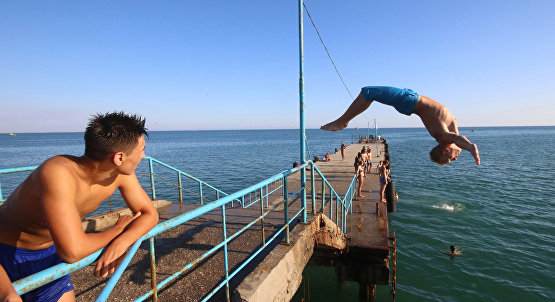 The day trip to Little Jerusalem is a highlight of the Yevpatoria itinerary. The route starts at Gezlev Fortress Gate, with a tower which is home to a legendary coffee house. The building itself was restored in 2004 as a replica of the 15th century gate. Coffee and sweets are made according to old Crimean Tatar recipes. The route abounds in restaurants offering Armenian, Crimean Tatar, Karaite, Jewish and Ukrainian cuisines. Visitors are also invited to buy folk art and craft pieces and even to learn how to make them.

The oldest buildings along the Little Jerusalem route date back to the 16th century: the Juma-Jami Mosque, medieval Turkish baths and dervish tekiye - a lodge for Muslim monks.

The Armenian Church of St Nicolas and the Egie-Kapai Synagogue were built in the early 19th century. The St Nicolas Cathedral in the Byzantine style was built in 1898 in honour of the city's liberation from the enemy army during the Crimean War.

The highlight of the route is the Karaite Church, or kenesas, which also dates back to the 19th century. A nearby cafe serves Karaite cuisine. It is the only place in the world where one can taste mutton with a walnut sauce served with lentils (k'oi etti bedzhirmeknen), special Chir Chir chebureks and Karaite pies made according to ancient recipes.

The museums of local history, the Pirates of the Black Sea and the Pharmacy Museum are also of interest.

The resort has a multitude of opportunities for children's leisure, including the Yevpatoria Park of Miniatures, the Golden Key Theatre, Delphinarium, Aqua Park, Dino Park (a large entertainment complex devoted to dinosaurs) and an amusement park. 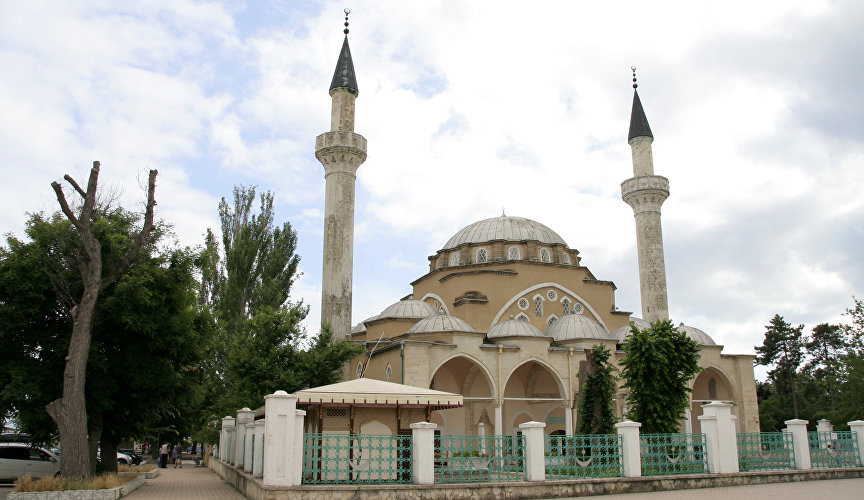 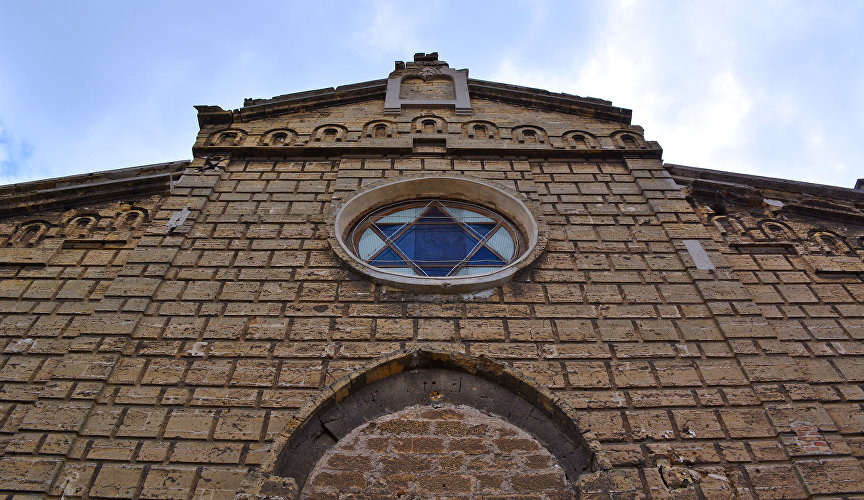 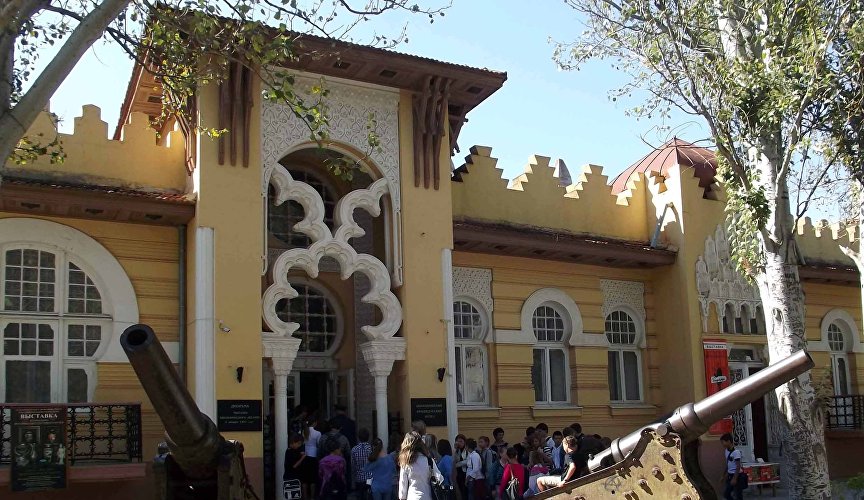 Yevpatoria is the capital of children's recreation and for this reason special conditions are envisaged not only at specialised children's camps and health resorts but also in the majority of accommodation.  The city abounds in hotels, boarding houses, motels and guesthouses. Private accommodation in nearby villages is also popular. To take advantage of the health treatments offered at the local health resorts, visitors can buy vouchers with a doctor's referral. However, many hotels have spa facilities (no medical documents required).

The city is famous for its shallow water sand beaches, which makes them perfect for families with young children.

Rehabilitation and treatments for people with disabilities have been available in the region since Soviet times, so the city's infrastructure and the majority of beaches are disabled-friendly. 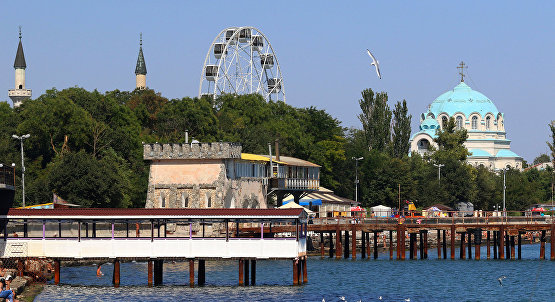 Yevpatoria is located 300 km from the Crimean Bridge. It will take 4.5 hours by car to cover it.

Buses connect Yevpatoria to most Crimean cities, and a commuter train runs from Simferopol. The distance from Simferopol is 55 km, from Sevastopol 102 km and from Yalta 151 km.

It will take 1.5 hours to get to Yevpatoria from Simferopol Airport. The same journey by commuter train will take 1 hour 40 minutes.

Around the clock hotline of Ministry of Resorts and Tourism of the Republic of Crimea: +7(800)5118018